“I am continually impelled by a restless spirit of curiosity in pursuit of new productions of nature, my chief happiness consists in tracing and admiring the infinite power, majesty, and perfection of the great almighty Creator, and in the contemplation, that through divine aid and permission, I might be instrumental in discovering and introducing into my native country, some original productions of nature, which might become useful to society.”    William Bartram 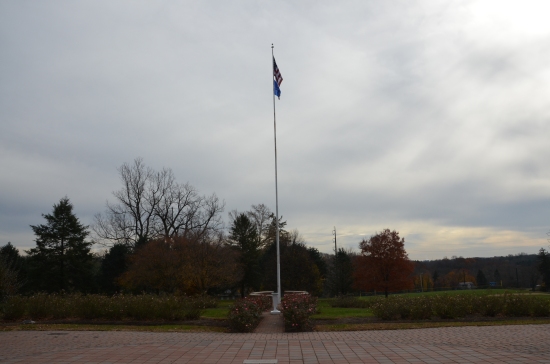 The flag is displayed proudly on the parade ground of Williamson Free School where all classes and categories of students gather each morning for roll.

The landscape and horticulture students at Williamson Free School of Mechanical Trades are working on an exhibit demonstrating the complexity of trading in botanical specimens during the 18th century.  Their investigations in the trans Atlantic crossing of seeds, roots, cuttings, divisions and containers will be unveiled to the horticultural public during this year’s Philadelphia Flower Show:  http://www.theflowershow.com/  It will be a brilliant assemblage of English landscape design and American scientific ingenuity.

This miniature model of Independence Hall displays the level of professionalism and horticultural excellence attained by featured exhibits on the show floor.

The senior class, under the tutelage of Chuck Feld, invited me to tour their campus and discourse on the technical challenges of sending the dozens of Bartram’s Boxes that successfully landed on English shores.  Officially, the students attend this school to receive training in programs that award them a degree as an Associate in Specialized Technology.  Also helping the Horticulture, Landscaping and Turf Management class will be the combined efforts of the other programs in Carpentry, Paint and Coatings, Construction Technology and Machine Tool Technology.  http://www.williamson.edu/about/history.htm 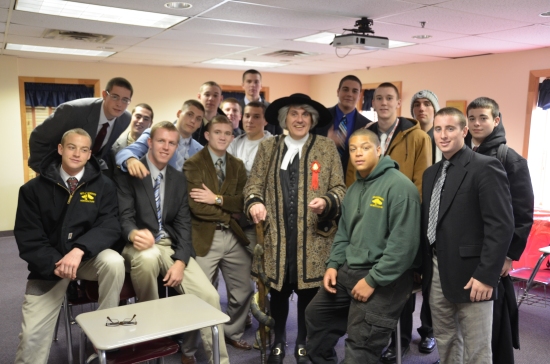 John Bartram joins the seniors of the Horticulture, Landscape and Turf class at Williamson Free School of Mechanical Trades.

The display will showcase all of the native North American botanicals that I introduced to the world of horticulture through my correspondence with many of the world’s most famous men of letters, science, and industry:  James Logan, Peter Collinson, Philip Miller, Carl Linnaeus, Benjamin Franklin, Mark Catesby, Peter Kalm, Johann Gronovius, and Johann Dillenius. 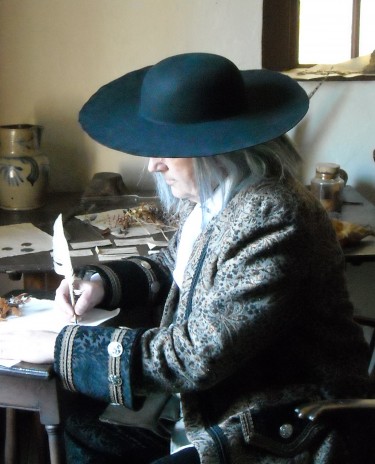 John in a familiar pose of writing to his many horticultural correspondents.

Featured in the exhibit will be rooted seedlings of the Franklinia alatamaha.  This tree, collected on a tour through the swamps of Georgia along the Alatamaha River, was never again found in wild after the early part o the 19th century.  The examples that we now have of it are all descendants of the original copse of trees that my son William and I discovered in 1765.

John and William Bartram discovered the unique Franklinia during a collecting trip along the Alatamaha River in Georgia.

The exhibit will educate the masses about the how, why, when, where, and who of the start of international horticulture.  This fine concept will ultimately recognize the amazing vitality and economic incentive given the art and science of botany by those members of the Philadelphia Quaker community.  Please stop by the booth on your trip through this “Brilliant” Philadelphia Flower Show between March 2 and 10.  I will be fronting the booth to welcome all comers during the first weekend of the display. 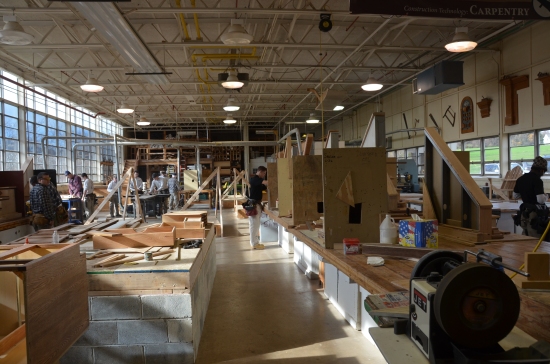 As the spring season opens, more will be said about the specifics of the display and the difficulty of translating a vision of 300 years of international plant search and sharing.