“Grilling, broiling, barbecuing – whatever you want to call it – is an art, not just a matter of building a pyre and throwing on a piece of meat as a sacrifice to the gods of the stomach.”    James Beard

“If we could see the miracle of a single flower clearly, our whole life would change.”   att. The Buddha

Ann and I traveled across the Delaware river today.  We came to a large home surrounded by artists painting in Plein Air (the signs said) and a day of Flowers being judged for the quality of their Show.  The most outstanding experience of the day, however, was our complete submersion into sights, sounds, tastes and SMELLS of the 18th Century.  We were in the midst of an age recreated.

Plein Air artists reminded me of my son William’s early attempts at painting.

Upon entering the house, the singular smell of a cooking fire in the kitchen hearth consumed all other senses.  It tracked into the corners of my eyes and tickled up to the height of my sinuses.  We were led into the cooking room.  Friends were busy chopping, tending fire, and generally preparing for the upcoming feast.  Ann and I felt at home–as we actually were. 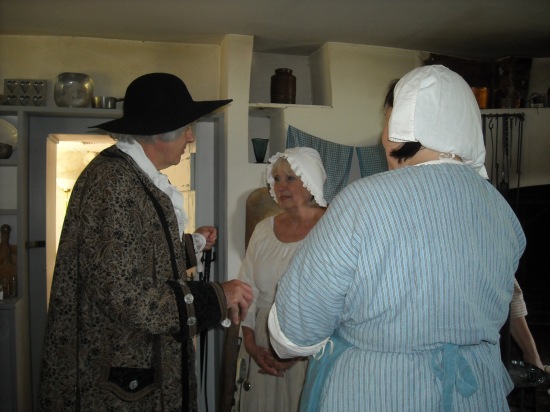 John Bartram in the kitchen of the Whitall Mansion

A Quaker family built the house in 1748 as the plantation home for their 400 acres.  I recall them:  James and Ann Whitall.  They had a large family in that grand home on the river.

The Whitall Mansion at Red Bank.

Ann was a strong and opinionated member of the Woodbury Meeting.  She possessed a fearsome devotion to our Saviour.  Few in her family could stand unreproached in its glare.  During the Battle of Fort Mercer, she was so convinced of her authority that she continued spinning wool in her parlor.  It was a direct connection between an errant cannonball and the gable end of her house that interrupted her work only long enough for Ann to retire to the basement where she continued.

I connect with the woman and her healing nature.  She gave sustenance and aid to the wounded on both sides.  She also gave religious lectures to the Hessians for making war on men at peace.  The hospital she opened in her dining room as surgery for the fallen was successful in saving more lives than the norm.  She used her knowledge of herbal remedies and demanded Quaker cleanliness for the dozens housed on the makeshift beds lying on the upper floors.

The day we visited this unique and resurrected household, the servants were recreated volunteers.  The household staff were ready with histories of the battle, home and 18th Century.  Life and small details were well rendered.

The Flower Show was organized and run by Ann Whitall Gardeners.  The titular owner had come full circle back to her physic garden.  The exhibits were colorful and engagingly staged throughout the house.  Noteworthy was the display of framed, pressed flowers–historic in context and continuity.  They were remains of the days when different people with different lives entered the door, looked out the windows and cooked at the hearth.

And we all gathered in the kitchen.  The smoke stung the eye but the warmth from the fire was lightened with humor and heart.  Pasties were made for dinner.  Cornish pasties.  As if there was a physical presence of the family’s heritage from West Country England.  The work-men taking a break from the mines, holding the ends of the crusts with dirty fingers.  Our day was not as trying.  Rain came hard and fast.  The crowd dispersed. 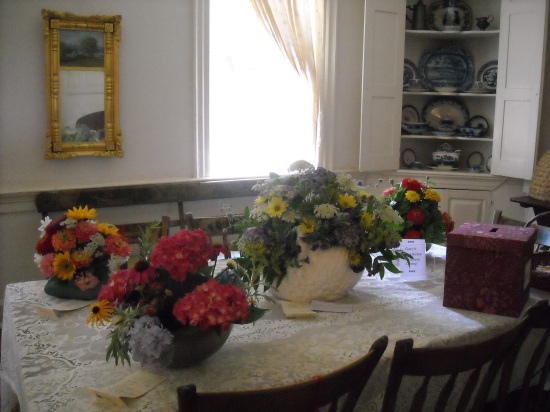 We left after a time with a memory of a good day and the smell of cooking smoke on our cloths and in our nose.  It will hang with the clothes put back in the closet until the next time.  Another event to be shared with yet more new friends across two hundred plus years of Quaker continuity.

The flowers displayed at Red Bank for John Bartram’s visit.