December 20, 2011 By Kirk R Brown in John Bartram is at home. Leave a comment

“I must not write a word to you about politics, because you are a woman!”  John Adams (to Abigail) 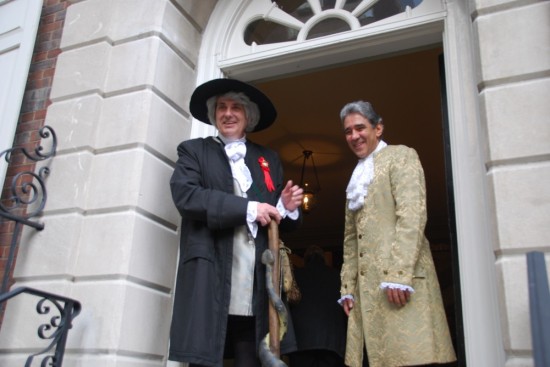 I received a request to appear at the home of colonial dames in New York City.  What was I to think?  How should I respond with such a chasm of misinterpretation potentially drawn out before me?  Colonial dames?  Do gentlewomen easily accept such a label?  But, it would seem to present a perfect opportunity for a John of any age to appear.  So I took my heart in my hand as I responded to the contact.

“What does the group want from me?” was my opening gambit.

“Well, some of our members have heard of you and we’d like to know what you could do for us.”

My age sometimes betrays me.  I was slightly confused.  But I gamely pushed on:  “I can do much, Madam.  But who or what specifically do you wish to appear?”

“Is there anyone else you do?”  The confusion multiplied exponentially.  She was good, this woman to whom I was speaking.

Not wanting to give too much away, I hesitated and tried a round-about route:  “Many lives intersect in all of God’s creation.  Each of us play many parts and live in many ages.  I can be many different men to many audiences.”

There was an intake of breath.  I felt myself blushing.  Perhaps I had gone too far.

“Let us begin again,” I said.  “Perhaps it would be better to tell me what group you represent and why your confederation of ladies gather to become enlightened.”

That opened the flood gates of information.  I discovered that I was being asked to present a horticultural lecture to the members of The City Gardens Club of New York City.  Confusion was at an end.  Arrangements were discussed and a date was confirmed.

John in the gracious entry hall of the magnificent Colonial Dames when speaking with members of the City Gardens Club of the City of New York.

Unlike any of my preconceptions, the group was perfectly well-behaved and attentive.  If anything, I was more the fish out of water.  Imagine, a centuries’ old Quaker cavorting with the sophisticated horticultural doyennes of the City Gardens.  I was humbled.

I was even ushered into the event by a man of my own time and dress.  We saw eye to eye about the ease with which the world can be deceived by looks.    Time distorts even the truth of the original intention:  Colonial and Dames are not an abstraction in this marbled hall.  The ghosts of history ask us to attend to the needs of country, family and honour.

And I am present to speak on the living world of horticulture.  It is a thread of centuries.  And I feel as though I’ve come home.

Then they served tea.  I didn’t note who poured but a great good time was had by all…

Tea was set and served after the horticultural presentation.