“The greatest service which can be rendered any country is to add an useful plant to its culture…”
– Thomas Jefferson, Memorandum of Services to My Country, after 2 September 1800.

Cypripedium spp. (Lady-Slipper Orchid) is our native North American species. It can be found throughout the northeast on the floor of the forest.

I have added more than 200 plants to the international horticultural inventory.  Although it is wrong for me to state it, I am proud of this accomplishment.  That sense of pride has certainly come at great cost with little chance of repayment.  I have spent months of my life in inconvenient travel through miles of forest trails climbing countless trees and mountains in search of unique and wondrous new species.

My pride is one of the seven deadly sins.  But I consider this transgression less than many that my fellow men easily commit without thinking.

A path along the small-leaf laurel border at Jenkins Arboretum

Nowhere has the pride of my inventory of plant material been more favorably showcased than Jenkins Arboretum!  It is a natural gem in my horticultural crown.  I have been there in many seasons and I will continue to return because there is always some fresh delight waiting to attract my eye.  If there were to be a better designed heaven-on-earth I would not recognize it as greater than this:  http://www.jenkinsarboretum.org/ 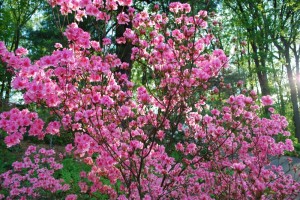 The sun sets on a small leaf laurel. One of the my personal favorites.

Although it has a number of magnificent specimens of many trees of my introduction, Jenkins has a large collection of small-leaved laurels and other relatives of the family that has come to be called Rhododendrons.  Jenkins has plants of the genus Kalmia.  And let me say that Peter Kalm, then and since, was a common thief and user.  He took food at my table!  He was sent to my garden by Carl Linnaeus to plunder my treasures, steal my secrets, and accept all of the “free” plants he could stuff into his valise.  He spent three years in North America “discovering” its many horticultural wonders.  He returned in triumph as the founder of dozens of unrecognized and unknown species.  Carl named Kalmia after HIM.  Not me!  It was an astounding rebuke to all of my hard-won knowledge and hard-earned collection of unique plants.  Peter Kalm’s collecting triumphs came mostly by digging them out of my front yard!  Just imagine the supreme audacity of the man!

When I think of how I treated him as a second son, the wrath builds up within me.  I am at such odds with this person who stooped so low as to willfully accept my hospitality while at the same instant was considering how many of my other children he would steal from under my nose.  There was a time when the wrath of God would not have been equal to my fury.

Wrath.  It is but another deadly sin!  So, I fought against it and overcame it.  And through discussion and prayer with my wife, Anne, the feelings gradually faded.  I am whole again.

On a quieter note, Jenkins Arboretum has a dusting of spring ephemerals sparkling on the floor of the forest in April and May:  Mertensia virginica , Tiarella, Trillium, Aquilegia canadensis.  Everywhere one looks there is a reminder that spring blooms eternally.  Spring is a celebration of rebirth and abundance.  Glorious.  The term ephemeral carries with it a meaning that may be a self-fulfilling prophecy.  In man’s haste to clear and root and build and expand, these spring ephemeral plants are threatened with extinction.  Because they disappear during the heat of summer, they many times escape our memory.  In my travels, I always remember where they’ve been.  But many times, once I’ve noted them and wished to collect their seeds in the following season, I’ve returned to find the colony gone without a trace.  They can disappear at our passing.

The Cypripedium or Lady-Slipper Orchid is one more of these delightful spring ephermerals.  It is a true native of North America.  You might remember that within every box of plants that I shipped overseas, I included a root of our native Lady Slipper Orchid.  It was a trademark.  And a challenge.  I dared the English aristocracy to make such a spring as ours that would allow them to bloom.  It took years and the creation of an industry of glass-house manufacture until Peter Collinson was able to duplicate the perfect combination of nature’s cycle.

Mr. Harold Sweetman chats with John Bartram prior to his appearance at the lecture.

Mr. Harold Sweetman, the director of Jenkins Arboretum, has put a clump of these fine Lady’s Slippers at the intersection of the main trail with the lesser path to his front door.  He lives within his domain.  His is a perfectly sustainable life.  How I envy his existence.

Envy!  That is the third of the deadly sins that I have admitted since the start of this observation.

And with that I should end to tempt God’s forbearance no longer.  I beg your forgiveness.

December 14, 2011 By Kirk R Brown in John Bartram is at home. Leave a comment
“The personal right to acquire property, which is a natural right, gives to property, when acquired, a right to protection, as a social right.”    James Madison

John surveys the extent of his land along the river south of Philadelphia, Pennsylvania

I have been neglectful of my posting responsibilities.  I have been too much in the public eye of late to take the time and trouble to put my pen to paper and communicate all of the wonders that I have passed in my continuing travels.

Public display gardens in America were virtually non-existent in the days of my youth.  As you know, I was among the first to commit a large amount of acreage to the cultivation of plants for the express enjoyment of the public and testing of the growing success of varieties of species.  I owned seven hundred acres of high-quality farm land.  There was excess to use for the betterment of society through my study of Botany.

I believe in the preservation of natural resources.  We shall develop that theme throughout the next several postings.  I was arguably the first man on record to write about the connection between the plant and animal world.  These days, the world has become smaller and our resources more challenged by encroachment from our infernal pollution.

It is up to us as individuals and corporate entities to set aside land for preservation.  We need to recognize the value horticulture adds to our life’s quality.

John Bartram speaks to his audience at Medford Leas Arboretum

But these days there are many more gardens open to the public.  And Philadelphia is a haven of horticulture.  I was pleased to be invited to three collections of trees–three large assemblies of plants on preserved acreage–three arboreta–to speak about my life and times with views that I strongly hold on how the world has been developed in my absence.  From my perspective of 300 years, much has changed to challenge God’s preeminent vision for His natural scheme of things.  We have taken on a God-like mantle and would wield his mighty sword to craft our kingdom within our own child-like design.

I have visited at three public gardens, attended one large-scale conference, ate through several dinner meetings, and witnessed a gathering of Colonial Dames in New York while at the same time speaking to several hundred people over these recent days.  I acknowledge how much energy that has taken out of my aged bones.  But I continue to thrive on the enjoyment I receive from passing the news that we can have a positive impact on our environment.  We can choose to plant trees, collect nature in preserved areas, and tread more lightly on the resources that are limited by our passing.  I am encouraged by the crowd’s response!  I will post in quick order my thoughts on these visits.

Hopefully in time for the winter solstice!