“A society grows great when old men plant  trees whose shade they know they shall never sit in.”   Greek proverb

“Those who labour in the earth are the chosen people of God.”   Thomas Jefferson 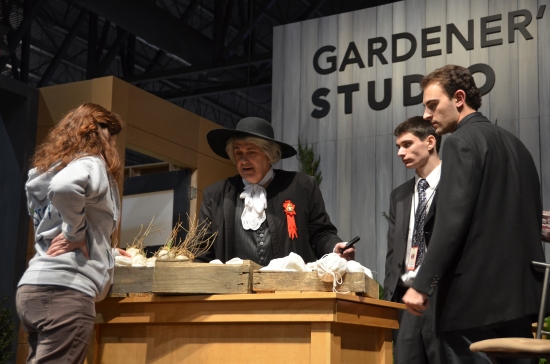 John had help from the students at Williamson Technical School as well as the staff at PHS.

Staff members from the Pennsylvania Horticultural Society asked me to talk. I agreed. If an opportunity presents itself to share a good word on the cause of botany before an enthusiastic audience, one should always accept it. 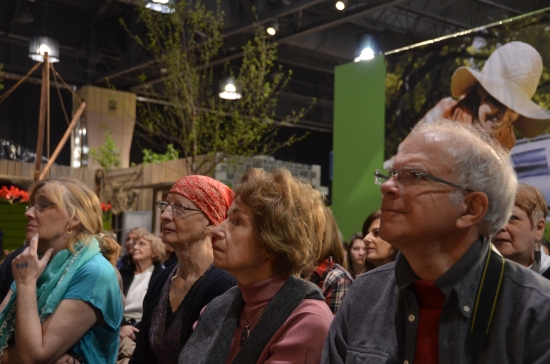 The audience was stilled by the discussion of John’s position in horticultural history.

The presentation was a give and take. Reviewing nearly 300 years of horticultural history can be a daunting proposition if all that’s covered is facts, figures, faces, and fictions. 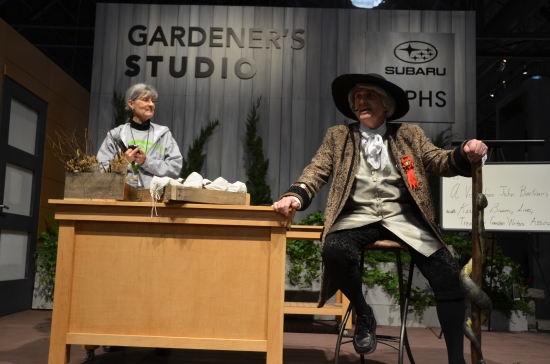 After the introduction, I had the audience to myself.

It’s much better if the history takes second place to interest, enthusiasm and contemporary point of reference.

The amplification device suited my mood and costume.

I was directed to use a device to project my voice over a large area of benched seating. There was a crowd of people collected on the seats while others walked past during and around the events of the hour. 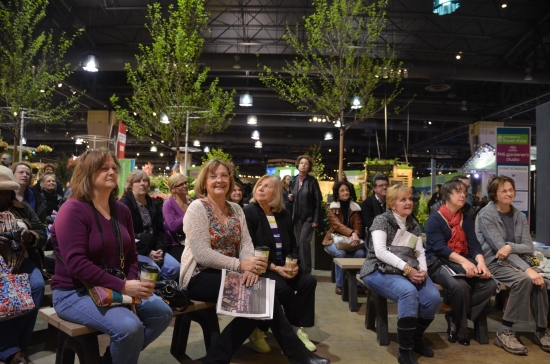 I had a full house at the first appearance.

Questions were asked and answered. And I was included in the discussion. “Who was I?” “What did I do?” “Are you William Penn?” (That was a popular question posed throughout the day!) “How do you ship plants in wooden ships?”

The snake on the stick was a great topic of conversation. Throughout my entire appearance on the show floor.

All of the questions were well received and thoroughly dissected.

Louise Clarke was present to confirm some of the horticultural details.

I must say that it was a pleasurable honor to be asked to speak. It was a momentous occasion to then have a repeat performance on a second night. It allowed me to change my linen and present a much more formal front. 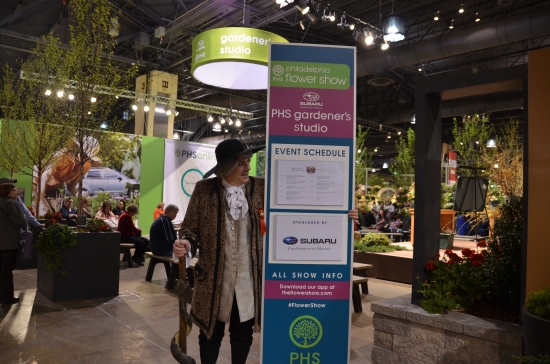 Large format advertising. The best format there is!

As for my wife, Ann had finally been allowed to come out from the fireside and experience her husband’s rhetoric in the first person. 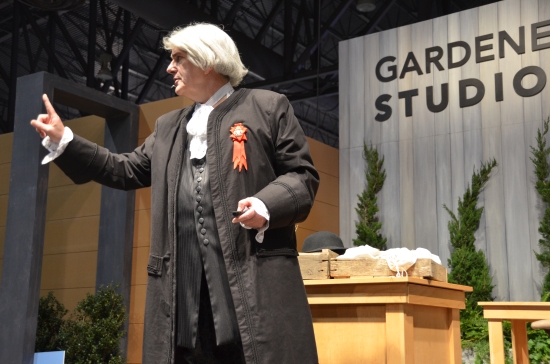 It’s a grand night when family members can come together in public to bask in the reflected glow of the limelight.

Kirk joins Sara out of context and out of character during the Press Preview of the Philadelphia Flower Show. It’s an awesome experience to see the exhibits being installed!

“My head runs all upon the works of God in nature. It is through that telescope I see God in his glory.”   John Bartram, December 3, 1762

“Since ten years old, I had a great inclination to plants.  I knew all that I observed by sight, though not by the proper names having no person or books to instruct me.”   John Bartram 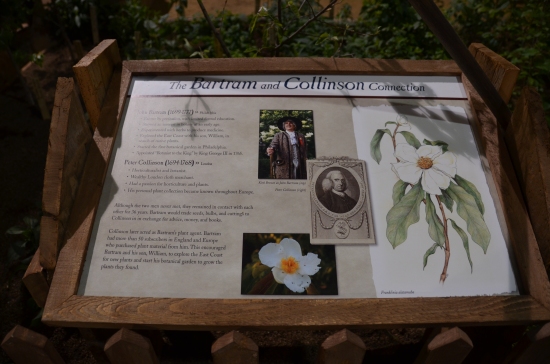 The history of Bartram in his garden was explained by the display constructed by Williamson Technical School at the Philadelphia Flower Show.

It was a glorious day to return to Philadelphia. Members of the senior class of Williamson Technical School unveiled their exhibition on the cultivation, harvesting, packing, and transport of plants and seeds for my Bartram’s Boxes. This major tribute to my seminal work on the distribution of native plant species through the horticultural world was on display at the Philadelphia Flower Show.

I greatly enjoyed sitting in the front of the display. Some would say that it is the height of recognition to have a booth at the world famous Philadelphia Flower Show dedicated to one’s life’s work. So noted! The show’s sponsor, The Pennsylvania Horticultural Society, is an organization founded in 1827 at a meeting “of gentleman farmers, botanists and other plant enthusiasts” that included members of my family. From that simple beginning such a tremendous show has grown. 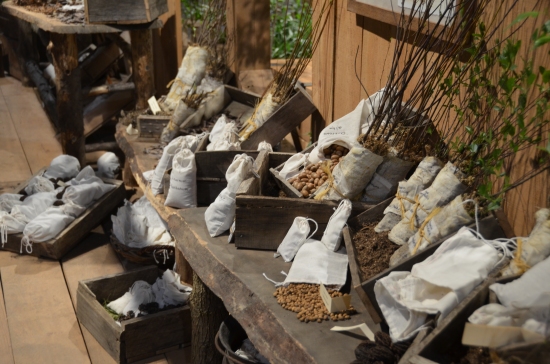 The display of seeds introduced by Bartram in his overseas shipments of botanical boxes was encyclopedic.

On exhibit were bags of all of my most favored plant species: Quercus rubra (Red Oak,) Acer rubrum (Red Maple,) Magnolia grandiflora and all of the magnificent understory shrubs. The assortment was greater than any I’d seen collected since days of my youth! 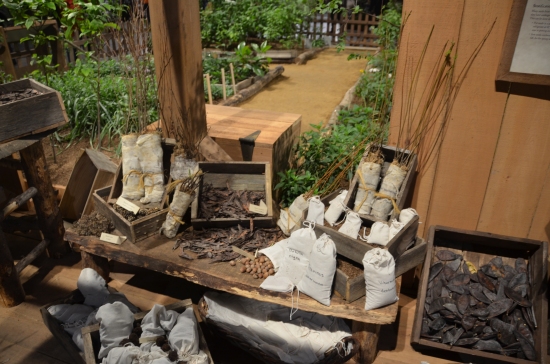 All of the samples were displayed in historically authentic context. The boxes would actually have looked like this.

The team of students from Williamson was a collection of scholars, botanists, artists and carpenters that reminded me of me at the same age. They were enthusiastic in their conversation. They were engaged with the topic. They were well turned out.

There were substantial awards given to the Williamson Technical School Booth on their demonstration of the Bartram’s Boxes.

As a result of their study and their industry, the display was awarded many prestigious prizes. I was very glad for them that their effort received its due recognition. How amazing after all of these years to be confronted with the very image of my house and garden and work rooms and packing stations.

History can and does repeat itself! 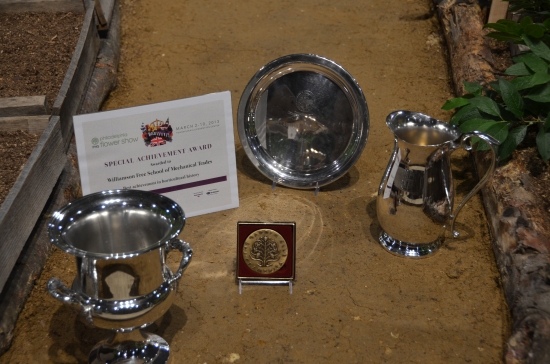 The major awards for this display on Bartram’s Boxes reflected the student’s dedication and passion to the subject. John Bartram would have been very, very proud!